Learn why Placeholders & Constraints are a central and powerful concept of the CreativeEditor SDK.

A unique feature of the Creator role is that it allows the user to define various Placeholders for every element which contain Constraints that can be individually set. Such constraints only apply to users with non-creator roles and define in which way such users are allowed to interact with this element.

For example, in the following image, an element has been defined as a Placeholder and the constraints have been set accordingly so that other users can only change its contents. The element is now selectable by default but cannot be deleted, styled or duplicated by users outside the role of Creator.

…or from the Inspector. 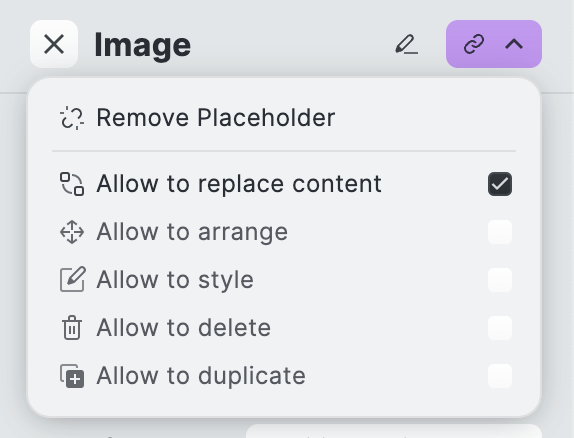 Constraints can then be set by opening the Placeholder menu. Additionally, Placeholders may also be removed from said menu, which means they are reverted back to regular non-editable elements.

By default, elements that were not defined as Placeholders by a Creator cannot be selected and modified by a non-creator user.

Identifying elements defined as Placeholders as a non-creator user#

Users outside the role of Creator may interact with elements defined as Placeholders. To identify all of these elements users may click on the canvas to shortly highlight them.